The last day or two has been very active, both in a good way and bad.
The outcome of my car accident was a complete total of the Prius, with an estimated $20K pay off of the Toyota loan. The rest is covered by the gap coverage which I purchased during the financial negotiations. I can’t praise gap coverage enough, it truly is a great C.Y.A. in case your 2 year old car gets destroyed, and you owe 10K more than the vehicle is worth.
The replacement of the Prius is completely different. I figured I’d try a different style of car since I don’t travel between states as often any longer. Due to the price of most cars, I figured why not go used and let that first year or two of depreciation go on someone else? I looked at some of the Scion models (FRS & TC) but the whole ‘fast and the furious’ wanna-be look was a bit of a turn-off for me. Not to mention after test-driving them, the suspension was nearly impossible to stand on roads that have irregular surface wear.
The two I was really choosing between was Dodge Charger, and Chevrolet Camaro. The Charger was very nice, with an 8 speed automatic transmission with paddle shifters, and the engine had a scary amount of power. The body style for me though was too docile compared to it’s competition. The interior was geared more towards a family vehicle, which is something I’m not going for since I don’t have a family… and the car is for me.
The Camaro took me back to the cars of the 70’s, and how they felt while riding in them. It has a firm suspension, but is more sedan-feeling during those road irregularities. The dash height and wide emptiness really did remind me of my Dad’s car back when I was 6. The plastic spanning across the doors and some other places is a little unnerving, but it’s a small thing. The torque delivery is very uniform, which makes it easy to judge how the car will react. The stock exhaust is rather quiet, though. The one I was looking at was the 6-cylinder LS model. 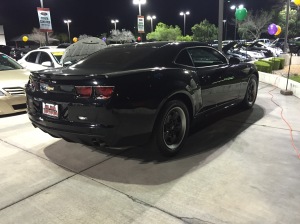 It was a tough choice, but since I have to look at my choice for many years, I went with the Chevy Camaro. Not because it beat the Charger, but because it gave me nostalgia and a sedan feel with a muscle car body. It also corners like it’s on rails, amazingly. The tires are wide enough to not have any issues, but knowing just how to steer the car takes a little getting used to.

As much as I hate to admit it, it definitely draws attention.  To make me happier, the exhaust is definitely going to be changed to something with a little more growl, since the stock version is very pacified and you only hear a hint of the growl while at more than 3/4 throttle. 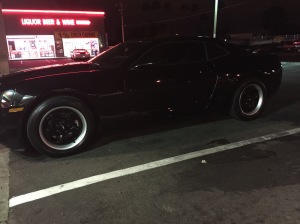 Aaaaannnd to talk about the knee.
The salesman was nice enough to drive the car to my place for me since I was on motorcycle.  As he was following me, we came to a traffic light that went from green -> yellow -> red in less than 1 second.  I hit the brakes, and some oil (or some other slippery liquid) made the front wheel dive out to the right.  Without thinking, I pushed my left leg down towards the ground hard, and pogo’ed the bike back up and stabilized it.  Now, the bike is near 800 lbs, and I am near 200 lbs, so nearly 1000 lbs was projected upward by my left leg.

Searing pain and throbbing throughout the entire leg immediately, so I could tell things weren’t going to work out well.  The next day, the knee area was swollen double the size, and the leg unable to bend.  The entire day was horrid so my doc took me in on an emergency appointment, and we have some powerful pain killers and anti-inflammatories in place to get rid of the swelling, which needs to happen before anything can be done.  Since the area isn’t blue, the thought is there’s no detrimental damage to the tissue/bone, but the internal knee nerves (which hav names but I can’t think of them) may still be ripped/torn.  I sure hope no surgery is necessary…. until then, hobbling and walking 1/10 speed is what I will be doing.  I’ll probably be using my arm crutches just to keep the speed from being so ridiculously torturous.  I am glad I didn’t go with the 6-speed transmission options for the car, since pushing a clutch right now is right up there with altering time/space by thought…. even getting into the car right now takes 5 minutes of maneuvering and pain.

On a side-note, I took hydrocodone about 1 1/2 hours ago, and right now it’s kicking in hard with jumpy vision.  I’m closing this article.  Thanks for reading.