After activating my milk kefir purchased from Cultures For Health (in dehydrated form, not my favorite but it is what it is), I’ve reached the point of the first fermentation run after activation!  I’m lactose intolerant, so bacteria that breaks down lactose into it’s simpler components makes my life far better.  Not to mention the added benefits of gut bacteria being added, along with the additional vitamins and such.  It’s also fun to screw around in the kitchen 🙂

That’s how it looks as it’s fermenting.  Pretty simple and easy – whole milk in jar, milk kefir grains plopped in, and a thin tightly woven fabric over the top, and a rubber band holding it on.  I pick the jar up and swirl it once or twice a day in order to get the bacteria worked around in there. (it does help)

After I let it sit for 24 hours and it was thick and *just* starting to get lumps, I swirl it good to mix everything together then toss a funnel onto the jar seen above and put a strainer over the funnel to pour it through.  It’s not necessary, but it’s called the second fermentation process.  It helps more B vitamins become bioavailable, along with other things in it becoming bioavailable.  It’s also the time you can include flavors that you want!  Since this is my first time, I haven’t done any experimentation since I just wanted to taste the base.  This is what I’ve seen as good ideas for flavoring:

After 8 hours of second fermentation, I figured I’d take the time to try it for my first time.  The glass above is how it looks, much thicker than milk at room temperature. 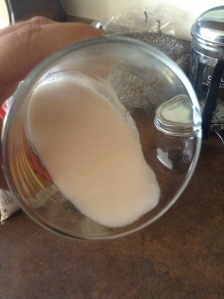 As can be seen in the glass above, the fermentation has broken down the milk quite nicely.  The taste is unique, vinegary with a hint of various other flavors.  As a base product, I can see this being very easily manipulated to my liking.  The major plus side to it all is that it’s very good for the digestive system.  The flora that is in the milk after fermentation makes yogurt pale in comparison.  I’m storing the 4 cups in the lock-top bottle, and brewing 1-cup at a time since it only takes 24 hours for each fermentation.  As a single guy, 1 cup of milk (of any type) for drinking is enough for any day, especially when there are other beverages such as water kefir!  (and soon after it brews, kombucha)

As a side note for those that have come to this page that are lactose intolerant – After drinking 2 glasses of milk kefir 6-7 hours ago, my digestion is fine.  I’ve not had any symptoms of lactose intolerance so the lactose was broken down correctly.