I’m lactose intolerant, so I can’t drink dairy milk because the lactose in it does not digest properly. While there are pills I can take, along with products like Lactaid that remove the lactose, the price is prohibitive, and misses the point completely… why try and fix the food when you can avoid it completely?

After getting tired of constantly reading the sugar amounts on soy milks you buy at the store (along with all of the additional content.. It’s a simple beverage, not a science experiment) I decided enough is enough and picked up a soy milk making machine for home. Thankfully, there are farms that ship soybeans over US mail, as well! Sooo, now I’m ready and on the roll! 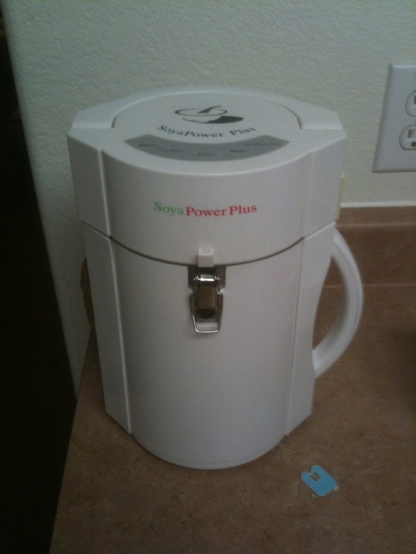 I went with a company named Sanlinx for the soy maker machine, and I absolutely love the quality. It’s a chinese product, but I’m actually amazed on how durable and quality-built it is. I went with the “SoyaPower Plus” model they sell, which is made for use with beans, rice, or soybeans. It ran me $109, and it came with the machine, a sample set of beans (enough for 2 batches, or 2/3 gallon of soymilk total), a little measuring cup for the soybeans, and instructions. I adore it honestly, it’s metal with plastic casing and just does what it’s supposed to do. It’s quite simple in how it works: soak a measuring cup of soybeans (or 2/3 of the measuring cup soybeans, 1/3 rice to thicken the milk) for 8-10 hours, then toss them into the SoyaPower Plus container. Then, you fill up the pitcher that came with it with water to the level marked, pour it into the machine, slap on the machines top, press a button. It’s relatively quiet… it does make noise, but about as much as a blender does, and it only runs when it really needs to, about a minute through the entire 15-20 minute run.
After it’s done, what I do is wait 2 or so minutes to let the machine cool down and become less frothy. Then, I pop the top and wash it off real quick to get it out of the way. Then, pour the container through the provided strainer into the pitcher, and bam… done. Of course, I have to wait until the soymilk is at a cooler temperature before putting it into the refrigerator. I wash out the container real quick at that point, as well. 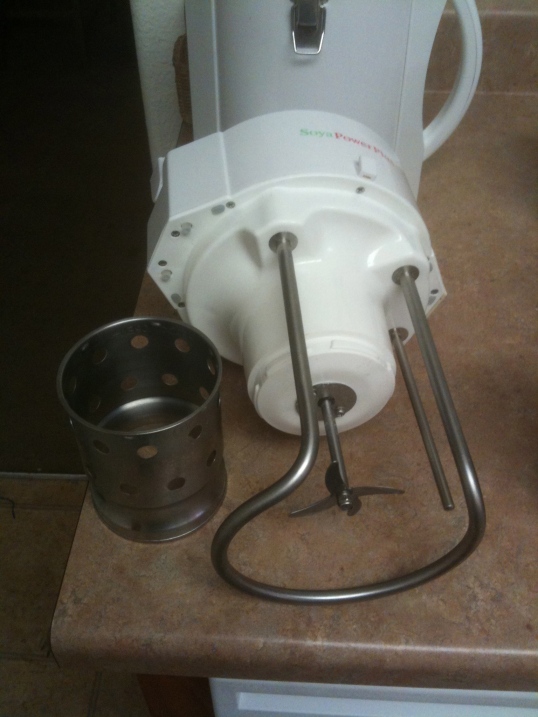 When I do it, I make 3 batches, which fills the gallon container which I confess is a gallon spring water bottle. I season to taste after, with a tablespoon of vanilla extract and 4 scoops of stevia sweetener… which I mix into a little milk before putting in because it needs to be stirred up first. Nobody wants lumps of stuff in their milk…

I’ve used the machine so far for about 4-5 gallons of soy milk, and it’s worked wonderfully for each. I need to experiment with rice milk, though it takes quite a bit more of the rice to create the milk from what I’ve been reading… like 2/3 cup. Another plus side is that with soy milk you can make tofu quite easily, if you want to use it in your cooking. The tofu presses run about $10, and all you have to do is take a bit of soy milk, bring it to a boil and pour it  into a bowl.  Then sprinkle a teaspoon of nigari (japanese sea salt from evaporated sea water) into a cup of hot water… pour it into the milk and wait a couple of minutes for a the coagulation. After that, get the coagulation out of the whey transparent liquid and put it into a cheesecloth inside of the tofu press. Then, lightly press it with around 5 lbs of weight for about 20 minutes. Done. At that time, it can soak in the fridge. Be sure to change the water daily.

One thing I have noticed is that making soy yogurt is not as easy as with dairy milk due to the lack of sugar product. This can be remedied by adding a teaspoon of sugar to the soy milk before adding the starter bacteria. (granted I’m talking about a liter of soymilk) This gives it some form of food to continue to grow.

EDIT 12/29/2011:  I’ve tried with 1/8th cup of rice and it thickens it to nearly the same consistency of dairy milk.  I use the usual long-grain rice sold at the store, and when I soak the soy beans I include the rice with it.  Also, just for reference I buy my soy beans from a farm named Fairview Farms and they sell a brand of soy beans named “Laura Soybeans”.  Their URL is http://www.fairviewfarms.com/ and they are non-GMO.  I picked up 20 lbs (mailed by  postal service, included in the price of $34.95 at the time of this post) and it’s enough to last me for months and months easy.  I’ll even go as far as saying 6+ months, since I only use a tiny little cup to scoop up soy milk each time which barely dents the supply.  Also, one thing to note is even though instructions say 1 cup of soybeans… it means after soaking for 8-10 hours.  The coolest thing is since it gets to 3 times it’s original size after soaking, the little cup that comes with the soy milk maker compensates for it by measuring the proper amount.
As far as tofu, I’ve noticed that when I add rice to the mix (for thickening) and I use that soy milk for the tofu it doesn’t coagulate right and fails to make tofu.  I ran pure soybeans to make the soy milk, then brought the milk to boiling, dumped it into a bowl and slowly poured the nigari/hot-water mix in… bam.  Coagulation began almost instantly.  An added bonus is that the tofu has a fiber texture to it, instead of the store-bought floppy odd stuff.

EDIT 02/21/2012
I found recently that if I filter the already strained soy milk through a cheese cloth, it’s much silkier and less gritty.  It also didn’t remove any of the flavor, which is a plus.  The amount of soy material on the cheese cloth after filtering makes me wonder how much of that is protein which should be left in there, however.

EDIT 07/27/2014
I wanted to add in that I have been using the Soyapower G4 soy milk maker for about a year now and it’s been a pretty awesome machine, making a little more soy milk but the biggest deal is it’s more resilient and can be used to make coconut milk and various other styles.  I’ve also recently started simply creating the soy milk in a pot when I have the time, which takes time and babysitting to make sure the foam doesn’t overflow.  It tastes the same, it just takes attention.  What I do is simply use the Soyapower G4 machine and dump in two loads of water from it into a pot, then boil it.  As it’s boiling, I toss 1/2 cup of soaked soybeans into a blender (I use my ninja) with 1 cup of water.  I run it for 1-2 minutes until the soybeans have basically been turned into a paste.  Once the water starts boiling, I bring it down to simmer and add the paste, and stir.  I then stir the mix and spritz the foam with a sprayer of cool water when it starts getting unruly.  It’s best to regulate the temperature a bit, as well.  After 20 minutes of that, you’re ready to take it off the heat and run it through the strainer as you would if it was coming from the machine.  Sure, it’s a pain but it lets you make two or more loads at once to save some time.  If I’m only making one or two, I still use my Soyapower G4, though.  It’s easy to fill with water, toss in the soaked beans, and push a button.

EDIT 03/22/2016
I wanted to add that the Soyapower G4 has been going strong and continues to operate nicely.

One thought on “Finally, Home made Soy Milk instead of buying it”